A lot of knitting and very little blogging in the end, but that’s life.

We had a great year in our group; loads of chatting and laughs but also some sadness. Let’s hope that 2019 is better for everyone.

So far, winter has been fairly mild with only the occasional frosty day. The pavilion is cold whatever the weather although it does warm up eventually with heaters on full blast. Unfortunately the warm air rises to the ceiling and stays there, so, at the end of a session our feet can be cold but our heads roasting. I think we need a fan to push the air round a bit more.

Maybe the cold pavilion has been the inspiration for the blankets that some of our ladies have knitted recently.

Christine knitted this lovely one: 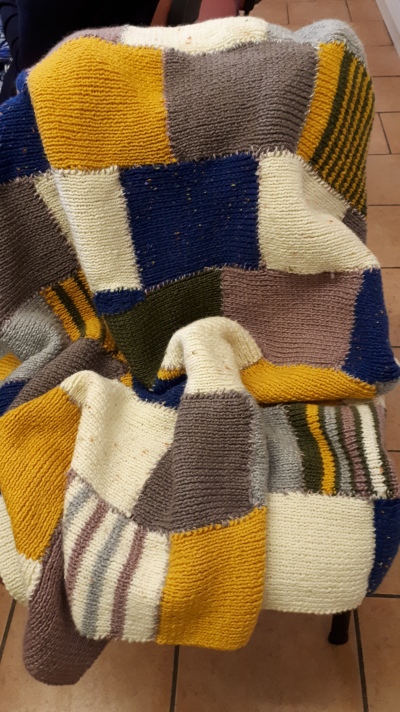 I knitted this one: 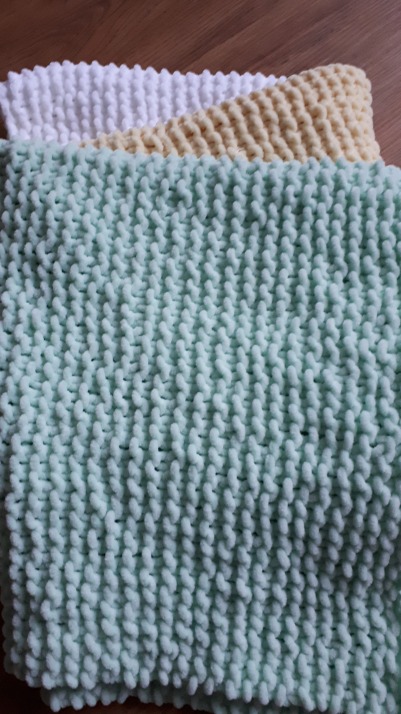 The yarn was a sample a friend had received and not used so she was giving it away. There were six balls in all and I made a blanket from 3 of them a while back. All the balls were different colours so the only project I could think of was a colour block blanket. The yarn is pretty awful – synthetic, a bit nylony, but soft to the touch. Not a yarn I would ever have chosen and certainly not one I would choose in future. However, it was utilised and the end result has gone to a charity shop.

The onset of winter is something that spurred me into finishing a project that has been in the making for around three years. Again, it was being offered to a good home so I just had to take it. These were squares that someone (I have no idea who) had already knitted but not done anything with. I mulled over what to do and in the end decided on scarves for a homeless charity. The squares were an awkward size – 10″ – too small for cushion covers but too large really for a scarf. But for homeless people the size is good because the scarf can be worn double and can also be used as a small shawl or wrap. 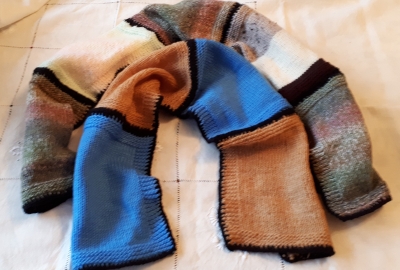 It’s interesting what a difference a border can make. Individually, the squares looked like nothing much at all, but adding the black has made them stand out and look good – as if that had been the intention all along 🙂